On Sunday the 29th August, 2021, the family of the late Alan B Carlaw, founder of Squadron Prints Ltd and former member of No. 43(F) Squadron, gathered together and made a private visit to RAF Leuchars. Whilst there, they visited Air Traffic Control, the former 43(F) Squadron HAS Site and the Squadron’s famous black and white chequered wall where Alan’s ashes were interred. A poem was read by Alan’s three daughters whilst Mrs Audrey Carlaw watched on. Former 43(F) Squadron member, Pipe Major Ian Hughes, played a beautiful lament on the bagpipes bringing a few tears and Mr Jim Campbell was on hand to represent 43(F) Squadron Association. A perfect final resting place Sincere and grateful THANKS to Team Leuchars and the Royal Air Force who helped make this happen. RIP Alan B Carlaw - sorely missed GLORIA FINIS.

11th November, 2020 - Gp Capt Derek Johnston RAF (Retd)
Chairman of the 43(Fighter) Squadron Association
Respects paid and wreath laid at our memorial in the Church of the Holy Rude, Stirling.
It was a peaceful setting to reflect on times past and
to remember friends and colleagues from the Squadron who are no longer with us.
Gloria Finis 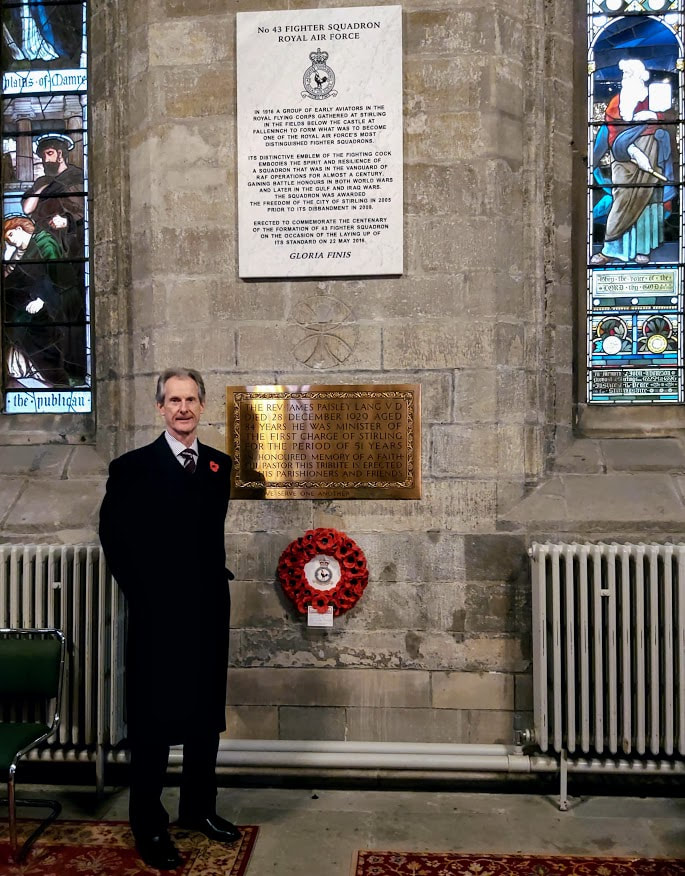 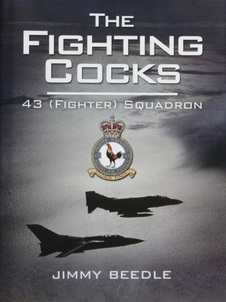 The past year or so has been a busy time for the 43 Fighter Squadron Association.  An updated history of the Squadron, covering the whole of the its life from 1916 to 2009, was produced by the Association and published in 2011 as the third edition of Jimmy Beedle’s original tribute.  The book now includes colour images, has a more contemporary style and contains many new photographs, both from the period of the original editions as well as from the later years of the Phantom and the whole of 43’s service with the Tornado F3.  It has also now been indexed and a number of new appendices introduced to create a more useful work of reference as well as, we hope, being a jolly good read. Special arrangements for Association members to obtain copies of the book may be found on the SHOP page

We have been informed of the deaths of two of our members: 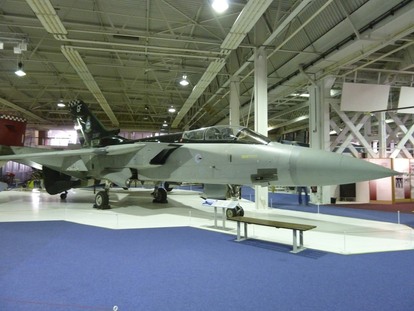 In the wake of 43 Squadron’s disbandment, the Association’s further priority has been the preservation of the Squadron’s heritage.  We were involved closely in preparing a detailed inventory of the Squadron’s memorabilia prior to it being dispatched to the RAF Museum’s Reserve Collection at RAF Stafford.  A number of paintings still remain on display in the Officers’ Mess at Leuchars and, given the uncertainties over the future of RAF Leuchars, the Association is exploring the possibility of these forming a collection on loan to the Smith Gallery and Museum in Stirling.  Of the three surviving Tornado F3s held in museum collections, two are ex-43 aircraft.  That at the RAF Museum, ZE887 the final CO’s aircraft, was placed in the Fighter Hall in 2012.  A further aircraft, ZE966, which flew throughout the Gulf war in 43 Squadron colours, is in store at the Manchester Museum of Science and Industry and is scheduled to go on public display in 2014. 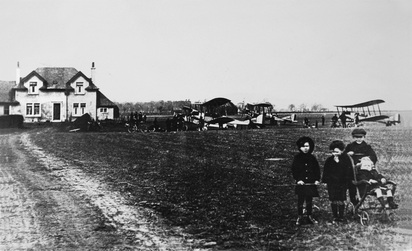 As an operational squadron 43 had maintained an active relationship with Stirling, as befitted a military unit bearing the Freedom of the City.     Shortly after the disbandment representatives of the Association met with the then Provost, Fergus Wood, to discuss the future relationship in the absence of an active squadron.   Without hesitation he confirmed that as far as the City was concerned the Association would to all intents and purposes retain the Freedom and exercise any attendant rights, although it was accepted that marching through the City with bayonets fixed might be stretching things a bit!    His was a fantastic reaction because it cemented our relationship with the City and gave a foundation for Association activities in an era without an active squadron.Also on the agenda at that meeting was discussion of a commemorative plaque or display to mark the long association between the Squadron and the City.  This would replace an earlier cairn, the location of which had sadly proved unsatisfactory and had raised little public awareness.   Our first thoughts had been to place a bronze plate on the ramparts of Stirling Castle, overlooking Falleninch, where visitors to the Castle could look down on the fields where the Squadron was formed.   Unfortunately this proposal proved impractical, however the redoubtable Fergus Wood came forward with a suggestion based upon his vision of a Visitor Trail around the City.   He suggested that where this route passed in view of Falleninch, the City, with help from the Association, would construct an information display bearing crests, artwork and text describing the formation and subsequent history of the Squadron.  A design is currently being developed in the Department of Art at the Forth Valley College with specialist guidance being provided by Association members Alan Carlaw and Dugald Cameron. 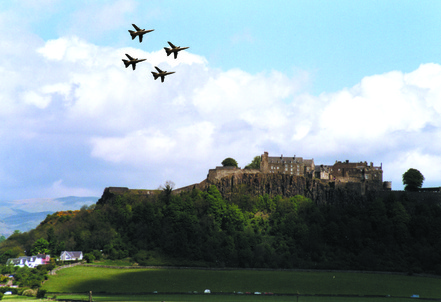 The Association was also given considerable prominence in 2012 at the conferral of the Freedom of the City on the 5th Battalion of the Royal Regiment of Scotland, formerly the Argyll and Sutherland Highlanders (A&SH) who had previously held the Freedom in their own right and whose regimental headquarters is located in Stirling Castle.   All 7 Battalions (5 regular and 2 TA) of the Royal Regiment of Scotland were present to parade the new standard which bears a summary of the honours earned by the constituent regiments, many long since defunct.   The ceremony in March provided us with an excellent opportunity to form links between the ‘military Freemen’ of the City.  The Regimental Colonel of the Royal Regiment, Lieutenant General Andrew Graham (late A&SH), expressed his enthusiasm for building upon our shared links with Stirling, a view reflected by our own.  One of the highlights of the Freedom weekend back in 2005 was the service in the Church of the Holy Rude.  The atmosphere was extraordinary as was the sermon.  Since then, following the disbandment of the Squadron, it has become evident to many that this church, which overlooks Falleninch field, would be a highly appropriate location in which to lay up the Squadron standard.  Informal discussions with the Vestry have indicated that they would be strongly in favour of such a move which would be a further step binding the Squadron to the City.  Taken in the round, the Stirling story is a good one and many people have had a role in its development.   Successive squadron commanders played their part as did a number of Provosts but the efforts of Willie Marr, who served with the Fighting Cocks and also the A&SH TA, have been an important and constant feature of the relationship in recent years. 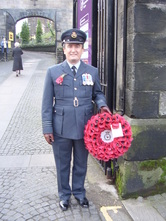 The Association has taken part in a number of other recent City activities, amongst them the Remembrance Day parade at which we have been represented by a number of members and have also provided the Reviewing Officer on a number of occasions.  There are those amongst our number who can still squeeze into their No 1 uniforms!


A Tale of 2 Secretaries 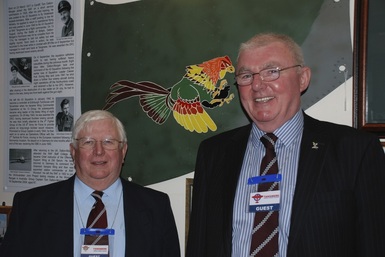 The annual reunion took place at The RAF Club on 19 May and it was particularly pleasing this year to welcome Wendy Bryan the sister of Caesar Hull, one of our most distinguished and charismatic commanding officers, who was killed in combat on 7 Sep 1940 at the height of the Battle of Britain and on the day that Hitler elected to postpone the invasion of Britain.   Equally it was good to see a youthful contingent of ex-43 groundcrew, now applying their skills to the Typhoon at Coningsby.  This year’s reunion also marked the changeover of our secretary when Bob Iles handed over to Dave Manley following his many years of loyal service to the Association.  This also heralds a handover from the Hunter generation to both the Phantom and Tornado F3 eras, Dave having served on 43 with both types.

Bob and Dave are pictured here beside a 43 Sqn Hurricane engine cowling during their visit to Tangmere this summer. 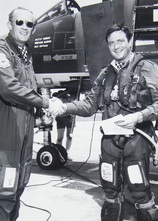 Having served for 13 years as chairman of the 43 Fighter Squadron Association, Air Commodore Ian McBride has also now taken a well-deserved rest.  Ian’s period of tenure embraced a number of milestones for both the Squadron and the Association, not least the award of the Freedom of Stirling, the 60th anniversary of the Association and the disbandment of the Squadron in 2009. He has been succeeded by Wing Commander Andy Moir who completed two tours on 43 during its Phantom days and subsequently returned to command the Squadron when it re-equipped with the Tornado F3 in 1989.  This is not their first "handover" as the accompanying photograph from the archives shows.  On this occasion Ian, as the then Boss, was presenting Andy with his 1000 hours Phantom badge in June 1980." 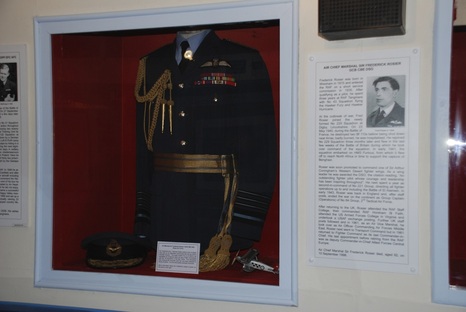 The Military Aviation Museum at Tangmere founded by Jimmy Beedle, one of the founder members of the 43 (F) Squadron Association, continues to provide loyal support to the squadron and unveiled a display of Air Chief Marshal Sir Fred Rosier’s uniform at a ceremony attended by members of his family and representatives of the Association in July this year.  Those of you who served on 43 in the latter days of the F3 may remember the uniform being on display in a glass case in the Squadron HQ but looking somewhat “tired”.  The curatorial staff at Tangmere have undertaken a magnificent restoration of the uniform an can be seen to have transformed it to a condition reflecting the distinction of our former President. 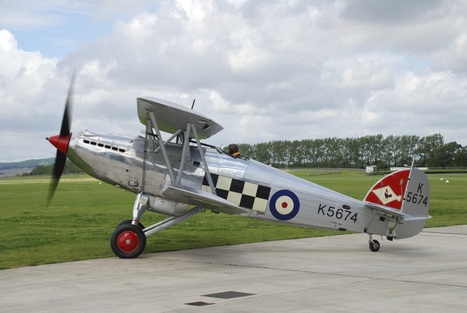 A related event took place also took place during the summer at Goodwood, the old Westhampnett airfield, with the inaugural public test flight of a newly restored Hawker Fury resplendent in 43 Squadron insignia.  The aircraft is the only surviving example of its type and was Sir Fred’s personal aircraft when a Flight Commander on 43 at Tangmere in the late 1930s.  It was transferred to the South African Air Force in 1940, remarkably ending up on No. 43 Squadron RSAF at Swartkop.  In March 1941 it suffered a forced landing and was subsequently scrapped.   Many years later the wreckage was discovered by Guy Black of the Historic Aircraft Collection Ltd in a South African scrapyard.  A lengthy period of restoration then ensued, culminating in the aircraft taking to the air once again this year at the end of a nineteen-year project.  Bob Iles and Andy Moir were privileged to attend the event and delighted to witness the Black and White Chequers of 43 become airborne again.

For the immediate future, in addition to our plans to erect a memorial overlooking the fields at Falleninch and to lay up the Standard in due course, we will shortly begin developing detailed plans for celebrating the 2016 centenary of the Squadron’s formation.