THE BEEDLE TROPHY
Jimmy Beedle was the 43 Fighter Squadron (Fighting Cocks) Association’s principal founding member, long-time secretary and author of the Squadron history.  Following his death in 1989 the committee of the Association commissioned a trophy in his memory to be presented each year to a serving member of the Squadron.

The trophy is in the form of a single blade of a Hurricane propeller cast in silver and mounted on a stand.  This reflects 43 Squadron’s service with Hurricanes from 1939-1943 throughout a key period in its history, including the Battle of Britain, in which Jimmy was involved throughout.  In fact he served with the Squadron from 1939 until 1947 starting as a Leading Aircraftman and finishing in the rank of Flight Sergeant.

The trophy was presented annually from 1990 to 2009 to the Non-Commissioned Officer or Airman who had displayed the most effort and achievement on the Squadron throughout the preceding year.  Following the disbandment of 43 Squadron it has been decided that this tradition will be continued but with the recipient being an individual who has made a significant recent contribution to the Association and to the memory 43 Squadron.

It was considered appropriate that someone particularly special should be awarded the trophy in the Squadron’s centenary year.  The first recipient - in 1990 – was the then Flight Sergeant Dave Manley. Now our secretary and treasurer, Dave has worked tirelessly for the past 4 years, a period when the responsibility for developing a growing membership in the absence of an active squadron, for securing the heritage contained in 43’s legacy of silver and paintings, and for undertaking the considerable weight of administrative support, including that for the centenary itself, has fallen wholly on the Association. No one successor to Jimmy himself is more deserving of the award in our centenary year and the Jimmy Beedle trophy for 2016 has been awarded once more to Dave Manley.
2017 The Trophy was awarded posthumously to Mr Willie Marr.  2018 Mrs Gill Howie and 2019 Wg Cdr Andy Moir, 2021 Mr Jim Campbell and in September 2022 at Leuchars Mr Sam Jones was presented with the trophy and is the current Beedle Trophy holder. 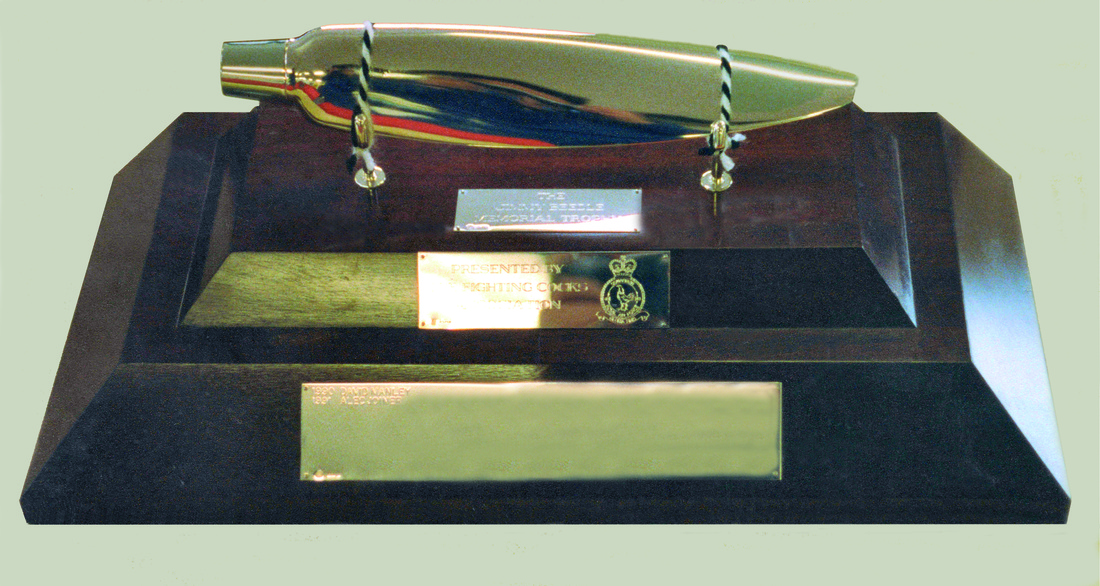